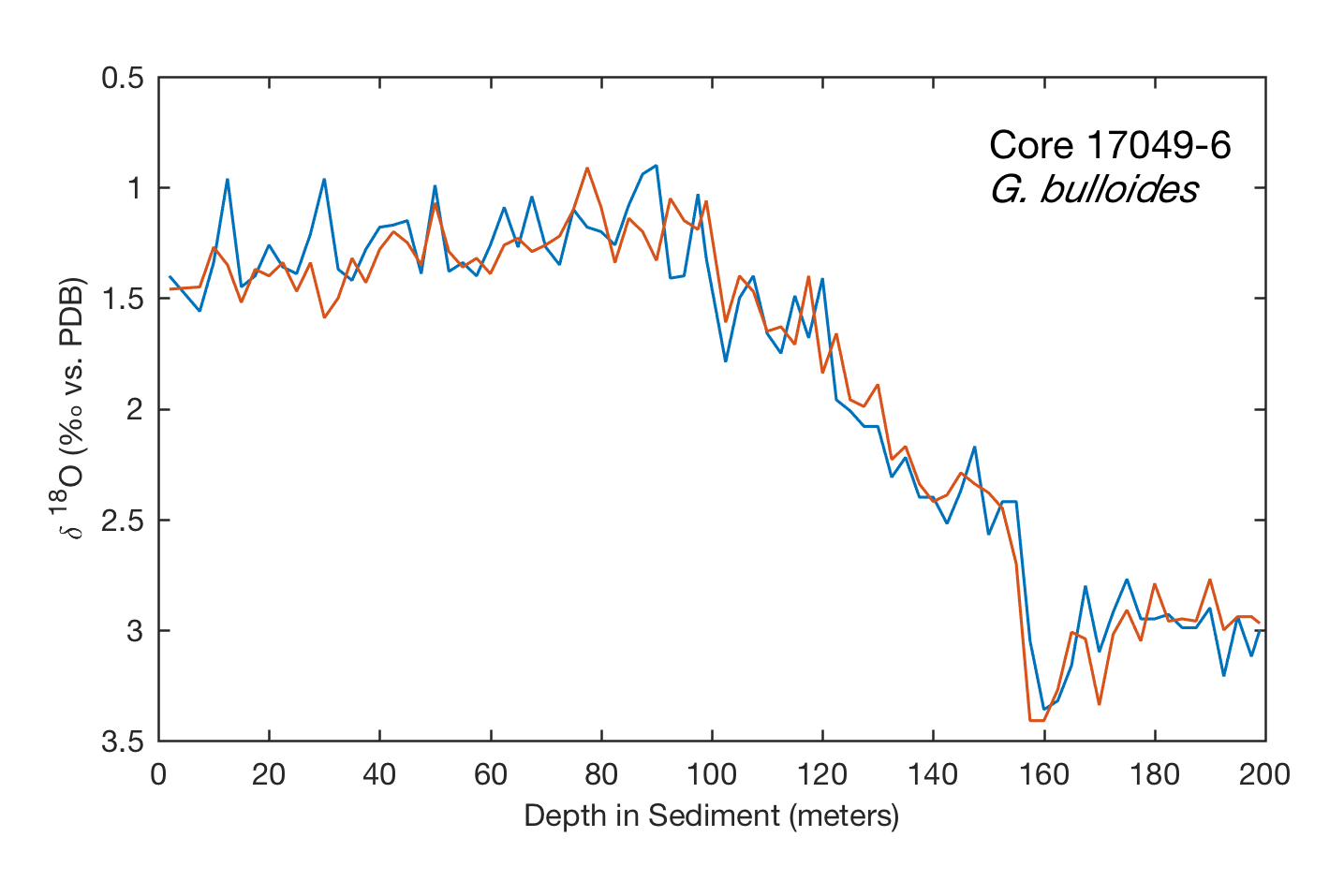 Time series of stable isotopes (oxygen, carbon) measured at foraminifers are often very noisy due to the combined effect of low sedimentation rates, intensive bioturbation and small sample sizes (5-20 foraminifers). Adaptive filters may help to increase the signal-to-noise ratio of such time series where conventional methods such as fixed filters cannot be applied if optimal filtering is to be achieved, because the signal-to-noise ratio is unknown and varies with time.

In order to estimate the contamination by noise and to enable the use of adaptive filters, I measured a duplicate oxygen isotope record from the planktonic foraminiferal species Globigerina bulloides (see graphics above, data from Trauth, 1995, 1998). The uppermost 2 m of core 17045-6 (55° 16.IN 26°43.1W, 3331 m water depth) were sampled at 2.5 cm intervals. Stable isotope analysis were performed on multishell samples of 20 tests in the size range 315-355 µm.

Measurements were made with a Finnigan MAT 251 mass spectrometer installed at the C-14 Laboratory of the Institut fur Kemphysik, Kiel University. The system routinely measures oxygen isotopes with a precision of ±0.07%. However, discrepancies of these two measurements come up to 0.63%. The mean discrepancy in the Holocene and the Glacial is 0.13% and 0.11%, respectively. The greatest uncertainties (0.16%) occur in the glacial-interglacial transition (Termination I). A laminated section occurs at 100-110 cm with a mean discrepancy of only 0.09%. The signal-to-noise ratio is therefore highly variable down-core.

In my paper published in the journal Mathematical Geology I suggested to use adaptive filters for noise removal from such duplicate time series. As an example, I used the above example among others, after introducing the method and demonstrating noise removal from synthetic time series. Here is an example using the MATLAB script originally published in Trauth (1998), revised for the 4th edition of MRES. Chapter 6.8 of MRES includes a MATLAB function canc but also GUI version of the same adaptive filtering algorithm named canctool. The filter is based on the Widrow-Hoff (1960) filter, modified by Hattingh (1988), adapted for paleoceanographic time series in a MATLAB function. MRES provides a detailed description of the algorithm, using a synthetic time series as an example:

We can run the filter with a convergence factor of 0.0001, a filter with 5 weights and 20 iterations. The three plots display the learning curve, the filtering results and the noise removed from the time series. See MRES for more details about the input and output parameters.

Using the GUI version of the filter, also described in MRES, allows us to quickly change the input parameters and explore the results:

The algorithm exports the filter result, the learning curve and the noise removed from the time series to the MATLAB workspace. The filter, both as MATLAB script and GUI function, can be downloaded here. Adaptive filters can be used for noise removal from duplicate time series in many other applications.