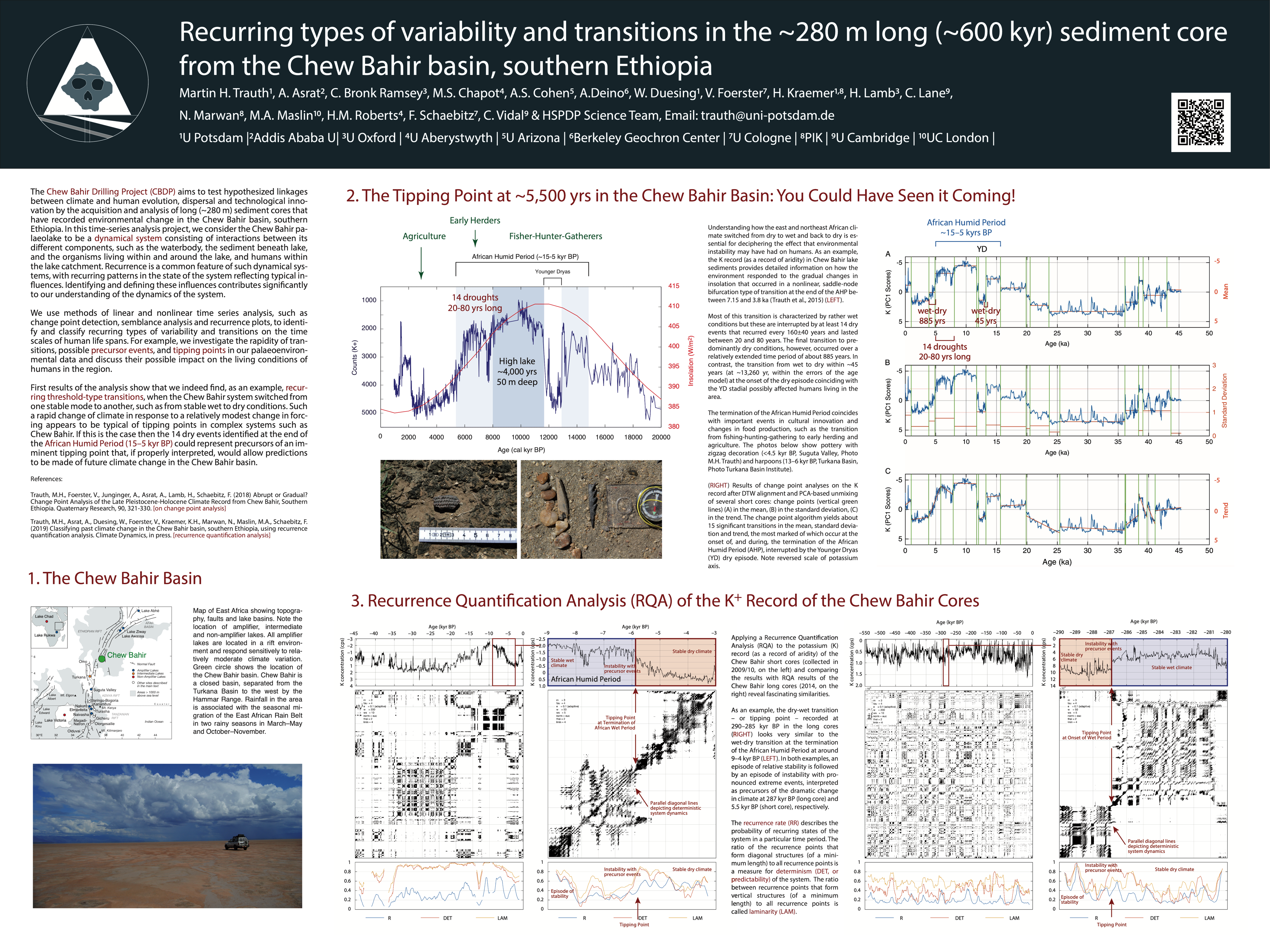 On Friday, April 12, 2019, I will present a poster at this year’s EGU General Assembly in Vienna, Austria in the Session SSP1.3 “Integrating stratigraphy, sedimentology, paleontology and paleoclimate in human evolution and dispersal studies – from early hominins to the Holocene“, organized by Verena Foerster and colleagues.

Recurring types of variability and transitions in the ~280 m long (~600 kyr) sediment core from the Chew Bahir basin, southern Ethiopia

The Chew Bahir Drilling Project (CBDP) aims to test hypothesized linkages between climate and human evolution, dispersal and technological innovation by the acquisition and analysis of long (~280 m) sediment cores that have recorded environmental change in the Chew Bahir basin, southern Ethiopia. In this time-series analysis project, we consider the Chew Bahir palaeolake to be a dynamical system consisting of interactions between its different components, such as the waterbody, the sediment beneath lake, and the organisms living within and around the lake, and humans within the lake catchment. Recurrence is a common feature of such dynamical systems, with recurring patterns in the state of the system reflecting typical influences. Identifying and defining these influences contributes significantly to our understanding of the dynamics of the system.

We use methods of linear and nonlinear time series analysis, such as change point detection, semblance analysis and recurrence plots, to identify and classify recurring types of variability and transitions on the time scales of human life spans. For example, we investigate the rapidness of transitions, possible precursor events, and tipping points in our palaeoenvironmental data and discuss their possible impact on the living conditions of humans in the region. First results of the analysis show that we indeed find, as an example, recurring threshold-type transitions, when the Chew Bahir system switched from one stable mode to another, such as from stable wet to dry conditions. Such a rapid change of climate in response to a relatively modest change in forcing appears to be typical of tipping points in complex systems such as the Chew Bahir. If this is the case then the 14 dry events idenfified at the end of the African Humid Period (15–5 kyr BP) could represent precursors of an imminent tipping point that, if properly interpreted, would allow predictions to be made of future climate change in the Chew Bahir basin.